Thank you for your patience while we retrieve your images.

This sleepy little town of Ingalls, OK was once thriving with outlaws….it was one of the many hide-outs used by the Doolin-Dalton Gang in the early 1890s. In August of 1893 members of the outlaw gang, including Bill Doolin, Bill Dalton, George “Red Buck” Weightman, George “Bitter Creek” Newcomb, Charlie Pierce, “Arkansas Tom” Jones, “Tulsa Jack” Blake and “Dynamite Dick” Clifton, were taking refuge in the small town, most of them having been in town for weeks living in the city hotel and spending a lot of time in the Ransom Saloon.

Of course the U.S. Marshals got word of their location, Marshal, Evett Dumas “E.D.” Nix formed a posse of some 27 deputy marshals and Indian Police and headed towards the little town of Ingalls. With this town being one of their hangouts they had a lot of friends there including a small boy who happens to see the posse camped out at a nearby creek not far from town. The young boy slipped away unnoticed and ran into town telling the outlaws “The marshals are coming”. The boy’s warning gave the outlaws plenty of time to saddle up their horses at the livery stable next door, but instead of making a run for it they return to the saloon to the poker game they were in the middle of.

On September 1, 1893 while the outlaws were drinking and gambling in the saloon the posse crept into town and that is when the Battle of Ingalls began. It’s not as famous as the Gunfight at the O.K. Corral in Tombstone, Arizona but it was more furious and more deadly. At the end of the battle three marshals and two residents would lose their lives with several people being wounded, including two of the outlaws, and one outlaw being captured.

There’s not much left of this little town but a series of old buildings are still present, including the Ingalls Hotel, a livery stable, saloon, and general store. Most of the townsite is now private residences. 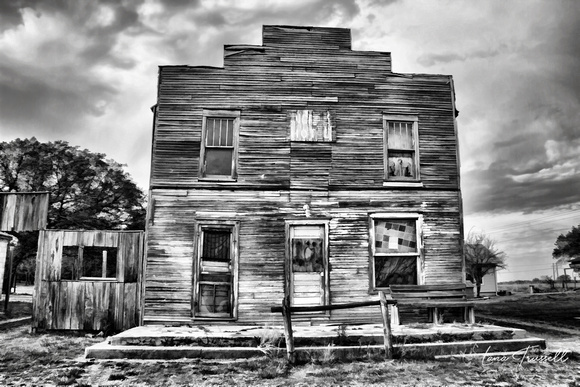