Haunted?  I think not.  It’s just a local lore and legend I’m sure that came because the place was abandoned and neglected for so many years.  It’s huge so I’m sure in its decaying days it was quite scary looking.  It used to be “The Mason’s Guthrie Children’s Home” or the “Guthrie Boys Home”.  The building was closed from 1978 to 2000 and was left to decay.  In 2000 a man and his family bought it and renovated it into a private residence and a new purpose in the community.  It’s called the “Dominion House” and today it’s used mostly for weddings.   As a matter of fact there was a wedding going on when I passed by to get this shot.

I love it when someone sees the potential of an old building and restores it back to its original glory….well almost.  They did take out a wing, but replaced it with beautiful gardens for outdoor weddings.

Okay so the story goes according to this source: http://www.treasurenet.com/forums/oklahoma/77186-boys-home-guthrie.html

There was a very mean head mistress, which once was punishing a 6-year-old boy and beat him to death. She buried his body in the basement.

When she was questioned, she said that the boy had run off when threatened with punishment.

Three years went by and four more boys mysteriously vanished. Then plumbing in the orphanage went out. The head mistress knew that the basement would have to be disturbed to fix the plumbing problem. She began to move the bodies. A custodian got curious about her strange actions. He followed her down to the basement where he saw her digging up the remains of the boys.

It is also reported that an employee of the boy’s home hanged himself in the bell tower.

Kind of sounds like it from this source that I have read:   http://www.hauntedhouses.com/states/ok/mason_childrens_home.htm

Several eye witnesses have seen an entity of a little girl who appears and pleads for protection.

The apparition of a woman has been seen walking down the main hallway.

A dark shadow has been seen in the bell tower, and has been known to hover around people who had broken in the building when it was abandoned.

When the building was abandoned, people report seeing apparitions appearing and disappearing in the rooms as the people peeked in the windows of the building.

Sounds of crying and screaming children in emotional pain have been heard, perhaps an impression of the negative feelings felt so long ago.

Construction workers hired to renovate the building, reported hearing unexplained footsteps, the feeling of being watched and hearing strange noises and crying.

Not a very pleasant history huh?  Well there is nothing in Guthrie’s records to suppose this…..so I’m sure it’s just stories that have come up over the years of it being empty and well scary looking in its decay.

I love the fence going around this place and the front gate is gorgeous! 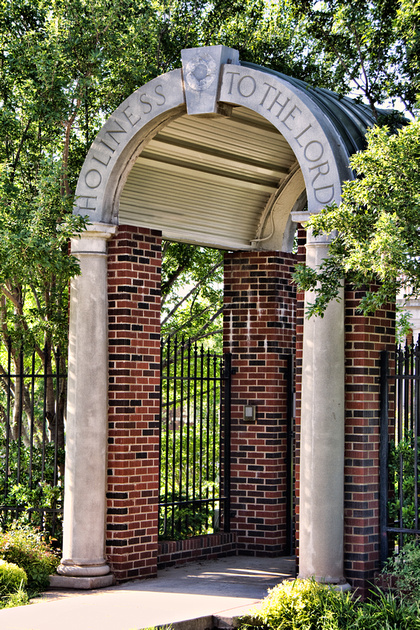 It's a beautiful setting for a wedding.....to learn more about the "Dominion House" http://www.dominionhouseguthrie.com/